OBESITY – An Epidemic for U.S. Pets! 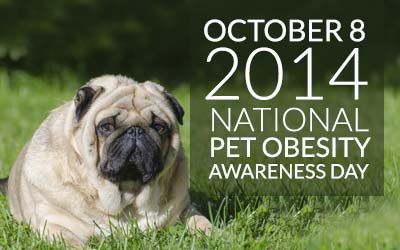 My neighbor, Doris W., has a problem that affects many Americans. Her cats are obese, and Doris isn’t alone.

According to new research released by the Association for Pet Obesity Prevention (APOP), veterinarians who assessed pets for the recent study recognized that more than half are overweight or obese. Cats carry the largest share of the obesity burden with 57.6 percent of the population recorded as overweight or obese. The dog population is close behind, with 52.6 percent of canines being classified as weighing too much.

The problem is that the majority of pet owners are blind to this issue. Dr. Ernie Ward, veterinarian and founder of APOP, says, “… obesity has the greatest collective negative impact on pet health, and yet it is almost completely avoidable.”

If it is avoidable, then what is the problem? Well, most pet owners are slow to recognize that their pets are overweight. As a matter of fact, pet owners who agreed to have their pets assessed for a study were first asked to classify their pets’ weight. Among all pets that veterinarians ultimately classified as obese, a whopping 93 percent of dog owners and 88 percent of cat owners initially thought their pet was in the normal weight range. APOP refers to this disparity as the “fat gap.”

Dr. Joe Bartges, a veterinary nutritionist and internist, stated, “There’s an entire nation of pet owners who are loving their pets to death with too many calories and not enough exercise. They are in the dark that their pets are overweight and that a host of diseases can arise as a result.”

So what can you do? First, all pet owners should speak to their veterinarian frankly about their pet’s weight. Next, you can signup to be a part of the National Pet Obesity Awareness Day Study! Finally, you can click here to access safe weight loss tools for your pet.

“Unless we really get a grip on this very quickly,” said Ward, “We’re going to see an entire generation of pets that don’t live as long as the pets I had when I was a child.”

Braxton's always strives to give pet owners the necessary …

While we all adore our feline friends, it's never fun to watch …

If your dog continuously barks, it might be an indication that …

There is a lot of misleading information out there and more information coming all the time. Check here for updates.
Read More →